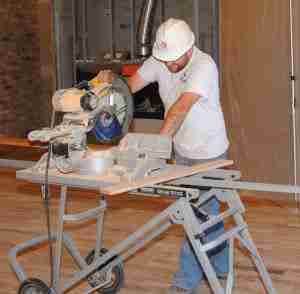 Pete Woodkey, Corporate Contractors Inc. project supervisor, works in the newly renovated lobby at the Beloit Inn on Friday afternoon. The hotel is renovating the conference area and all the rooms in the building.

The Beloit Inn is in the middle of a complete overhaul.

Work began on the hotel in early May on the lobby and meeting rooms. Rob Gerbitz, COO of Hendricks Commercial Properties, said that phase of the work should be done by the end of August.

The next phase is to renovate all the rooms, which Gerbitz said should start before the end of the year.

“The entire hotel has been completely gutted except the rooms that we haven’t started on yet,” he said.

The hotel, at 500 Pleasant St., has been open the entire time during the construction project, and Gerbitz said the feedback has been very positive. The Beloit Inn Facebook page has weekly updates and photos on the renovation process.

Over the last week photos have been released showing the new lobby lounge bar and event space renovations that will be able to host weddings and business meetings.

“We’ve been kind of giving little snippets (on Facebook), and we’ll do that until we do a grand reopening sometime in October,” Gerbitz said. “We only have a couple rooms out of service right now, but we’ll be taking a few more out in the next few weeks.”

The goal is to close six rooms at a time. Hendricks Commercial Properties has co-owned the building along with other investors since 2001, but bought out all the other owners in December, Gerbitz said.

He said this is the first major renovation the hotel has gone through since it was built and believed it was time to upgrade. He declined to give a cost of the renovations.

“We wanted to freshen the place up a little bit, and give it a full face lift,” he said.

Just across the river, Hendricks is also completing work on part of the Ironworks Building.

Gerbitz said Universal Acoustic and Emission Technologies have been planning to expand in the Ironworks Building for about a year.

“They are in a smaller part of the building right now, but this is their final expansion and resting place in here,” Gerbitz said.

The Stoughton, Wis.-based company moved into a 22,000-square-foot space in March 2012. The company makes noise reduction for large equipment used in the industrial field.

Gerbtiz said crews are gutting an area of the building and replacing the windows that face the Rock River. No timetable for its completion has been released.