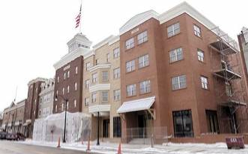 BELOIT—Rod Gottfredsen vividly recalls the day in 1986 when he and seven other people met in his one-chair barbershop in downtown Beloit.

The topic at hand was the state of downtown.

“Not only were some of the buildings without upstairs windows that pigeons were flying in and out of, but many of the lower windows were boarded up as well,” Gottfredsen said. “Things were looking pretty shabby.”

Much of Gottfredson’s excitement can be traced to several ongoing and recent projects in downtown Beloit.

It would be an overstatement to say Beloit is rejuvenating or revitalizing its downtown. It started that process more than 25 years ago when it was one of the first communities in Wisconsin accepted into the state’s Main Street program.

What’s happening instead in Beloit is a continuing evolution that observers say is necessary to keep the downtown relevant.

The organization oversees a Business Improvement District that includes 160 members in a designated downtown area.

“Were constantly trying to build on what we have in our downtown because it’s so important to our community,” she said. “Our work is never done.”

What downtown Beloit has is an eclectic mix of retail stores, services and restaurants. It has housing. A grant program last year helped redevelop 15 upper-floor apartments, most of which were rented before they were ready, El-Amin said.

What downtown Beloit doesn’t have is many vacant storefronts.

The last of the most significant vacancies—a stretch of East Grand Avenue that was once home to Wagner’s Office Supply and other businesses­—was demolished last year.

ARISING FROM THE ASHES

Under construction in its place is the Phoenix Building, a four-story retail and apartment project of nearly 40,000 square feet. The first floor will be a mix of offices, retail and restaurants. The top three floors will include 27 market-rate apartments.

While it’s one building, façade work on both the front and back makes it look as though it’s five buildings constructed side-by-side in a bygone era.

The Phoenix Building is a project of Hendricks Commercial Properties, a Beloit-based company that manages and owns more than 15 million square feet of real estate properties in 39 states. Diane Hendricks, co-founder of ABC Supply, owns the company.

“This is a very enjoyable project in our own backyard,” said Rob Gerbitz, the real estate company’s president and chief operating officer. “A lot of times, us building a Wal-Mart somewhere is about making money.

“A project like this is a long-term investment in the community, and Diane has been adamant that we think long-term when it comes to Beloit.”

That was the company’s approach when it rebranded and remodeled the nearby Beloit Inn and Café Belwah, which are now respectively known as the Ironworks Hotel and Merrill & Houston’s Steak Joint.

It’s also the approach as the company continues a $40 million transformation of its Ironworks campus—the former Beloit Corp. just across the Rock River—into a state-of-the-art manufacturing and office facility that is home to more than 15 different businesses, with more knocking on the door.

The $7 million Phoenix Building will do more than fill a significant chunk of East Grand Avenue that’s been a vacant eyesore for more than a decade, El-Amin said.

It will offer a nice mix of businesses and restaurants and take the downtown’s housing inventory to a new level, she said.

El-Amin said the downtown association is aggressive in filling vacancies with the right types of businesses.

“When we see a void or something we don’t have downtown, we try to go after it,” she said. “Anyone who has a business that’s unique to the area thrives downtown, and it creates a cluster so you can walk from one to the next.”

With the surge in housing, downtown Beloit has become a place where people can live, work and play, she said.

Gerbitz said he’s confident his company will be able to rent all 27 units in the Phoenix Building, which should be finished this spring.

Monthly rent for the one- and two-bedroom Phoenix apartments likely will start at about $1,100, Gerbitz said. The target market is likely young executives or couples new to the area or in Beloit for extended training. Beloit College also offers potential with faculty or older students.

“People have responded very well so far, but it’s tough to show them what it will be when all they can see is studs,” Gerbitz said. “We think the market is there.

“We’ve got ABC Supply, Kerry, Regal-Beloit, Fairbanks and Taylor to our south–all very large companies. We think this will work for people who want to live downtown and walk to the restaurants and stores.”

Gerbitz said the Phoenix Building should serve as a catalyst for other projects.

He’s quick to point out that Hendricks is not the only downtown investor. Other property owners are heavily involved and continually investing in their properties.

“Good, strong businesses are the heart and soul of the downtown,” he said. “When we see a small business go out of business, we’re disappointed, but the amazing thing about this community is that, when that happens, people are immediately thinking of what’s next that will work.

Gottfredsen the barber agrees, saying he hopes downtown Beloit will look different in five years than it does today. He also believes that while the commitment from Hendricks Commercial Properties has helped, the evolving downtown is the result of many committed players.

“Thank God for all they’ve done, but when we started the BID, they weren’t on the train,” he said. “I do think the Phoenix Building will be a wonderful catalyst.

“If they fill those 27 apartments with either one or two people, those are people who will be spending money downtown.”

Andrew Janke is now Beloit’s economic development director. Back in the late 1980s, he held El-Amin’s position with the downtown association.

“Back when we started this and became one of the five inaugural Main Street communities, we understood it would be long-term process,” Janke said. “We weren’t expecting a home run with one or two projects.

“We understood that to be successful it would take time and be something that needs continual attention, and that’s proven to be the case. That’s a testament to the support of downtown business owners, volunteers, board and committee members, as well as the support of the city.”