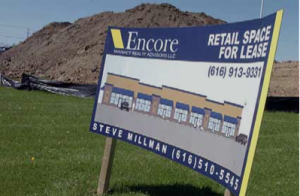 LIMA — The already busy shopping area along Elida Road is about to get a bit busier.

Construction crews have been working for the past two weeks on what will soon be a strip mall in front of the Meijer store near the corner of Elida and Eastown roads.

Peter Ginn, senior development manager for Hendricks Development Corp., said his company is about to

close on the purchase of the property from Meijer. By the beginning of June, it will begin construction on a 12,000-square foot strip mall.

“The idea is to develop a strip center there. We’re hoping to close, if anything works out correctly, by the end of this month,” Ginn said.

The strip center will be leased out for retail and possible professional services space, Ginn said. The company is already in negotiations with one national retailer to take up about 30 percent of the space.

“We want to begin construction immediately. We’ve engaged an architect, and hopefully by the beginning of June we’ll be started and about three months later we’ll have put the building up,” Ginn said.

Hendricks Development is a Wisconsin-based real estate developer with more than 374 sites, most of them in the Midwest. It hired Wisconsin-based Corporate Contractors Inc. to build the mini mall.

American Township Zoning Inspector Brad Settlage said the permit for the construction has not been issued, so there is no site plan available that would give details of the project. The company does not need a permit to prepare the land.

The business would sit in the parking lot of the Meijer store, facing the store, so no additional entrances or exits to Elida Road will be needed, Settlage said. The biggest concern for many passers-by has been where that massive mound of earth will be going and what effect it might have on drainage in the area.

Settlage said he is keeping an eye on things, but he said he’s confident everything will meet with code.

“They are very aware of what it’s zoned and what they can put in there,” Settlage said. “We’re really happy to see something going in there.”