Building has pieces of past 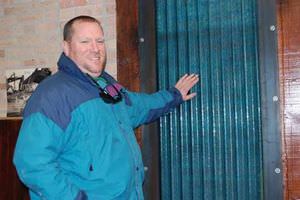 A unique touch at new headquarters

The building will feature glass from an historic Fairbanks Morse building in Beloit and cedar from the former Rainbow Springs Resort in Mukwonago.

Located adjacent to CCI’s limestone quarry on the corner of Gateway Boulevard and Town Hall Road and overlooking Interstate 43, the new bi-level building will house CCI on the upper floor and Blackhawk Transport on the lower level when it’s completed this March, according to Senior Project Manager Terry Russell.

“The project is about half done. The structure is up, and we are doing interior wall framing,” he said.

The project started in June when Diane Hendricks — seated in a Hitachi 450 excavator — helped tear down the aging Turtle Town Hall building.

CCI had been making plans for the facility since 2012 when it purchased the limestone quarry from Bob Halderson of Custom Ditching.

Designed by Bray Architects, the first floor exterior features mostly a limestone veneer and the second floor features predominantly glass for a stunning view of Interstate 43. Those driving by on the interstate or Gateway Boulevard will see the structure’s tilted roof.

Inside, the structure will be open with exposed wooden beams, two fireplaces and murals.

Outside, separate upper and lower parking areas will serve each company and a walk bridge will be constructed over a patio area that connects the upper parking lot to the second level.

The custom-made desks as well as the sliding doors will be made out of cedar from reclaimed wood taken during a DNR cleanup project of Rainbow Springs a few years ago. Russell estimates the cedar door frames come from the 1970s. He said CCI held on to them for some time before finding the best use for them.