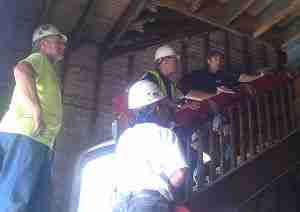 Pete Woodkey, Corporate Contractors Inc. project supervisor, works in the newly renovated lobby at the Beloit Inn on Friday afternoon. The hotel is renovating the conference area and all the rooms in the building.

The Castle isn’t quite ready to open its drawbridge, but significant progress has been made.

The old Presbyterian Church at 501 Prospect St. is still a few months away from opening, but owners John and Jody Wittnebel are pleased with the work so far.

“We thought June might be a good time, but we are doing a lot more renovations, and we underestimated the regulatory process that it would take,” John said.

All the demolition work has been done, and now they are working with Corporate Contractors Inc. on the renovations.

When they began demolition on some parts of the building they discovered the old architecture from when it was first constructed in 1906.

“Ever since we started tearing it apart I’m just connecting with the former builders,” he said. “They put it all together without electricity and I’m really just humbled by the whole thing.”

John said there was a lot of the old design that he wanted to preserve like the original ceiling installed with high wood beams in the attic area.

“We’re going to put the stained glass back in the top of the windows and it’s going to look really nice once it’s finished,” he said.

The Beloit City Council recently approved a Class B beer and reserve liquor license for the business during Monday night’s meeting.

The liquor license had to go through the Alcohol Beverage License Control Committee three times before it was approved mainly to conform to state law.

Under the law the Wittnebels have to be the sole proprietor of the building, which means their non-profit organization Youth Unite can’t occupy the same building on a permanent basis.

The organization can still rent space for programs held, but can’t have an office on the property.

John Wittnebel said they already agreed not to sell alcohol during Youth Unite events while councilors were considering a conditional use permit. So the outcome doesn’t change the ultimate goal of the facility.

“It doesn’t change our operating plan just our occupancy plan,” he said.

The liquor license has to be issued within six months of the council granting it, said Elizabeth Krueger, deputy city attorney, during the council meeting.

First the Wittnebels need the kitchen to be completed and inspected before the liquor license can be issued. John said the kitchen renovation has become the main project right now.

He’s hoping to get it completed by the end of August, but they are waiting on some of the contracting work.

“It’s a pretty busy season for everyone right now, but hopefully we’ll have most of it done in a month or so,” he said.

The building has already been named one of the venues for the Beloit International Film Festival next year, and that is when they plan to have a big opening.

John said they already have plans for open mic nights at the “Dragon Cafe” in the basement of the building, and they also have booked a wedding for August 2014.

Progress at the Turner STEAM Project