ASHLEY MCCALLUM | Gazettextra
Thursday, June 1, 2017
BELOIT─Beloit Hospital is preparing to take the wraps off a new cardiovascular services facility the community help pay for with $7 million in donations. The $13.8 million Hendricks Family Heart Hospital occupies 34,000 square feet on the hospital’s fourth floor and 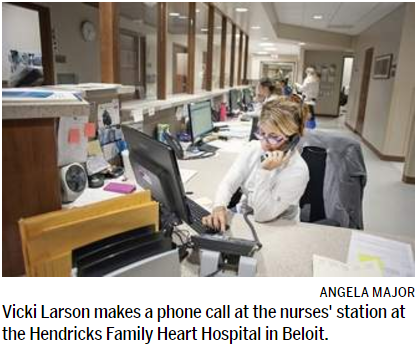 accommodates all of the hospital’s cardiovascular care.

The Hendricks family gave $3 million toward the new heart hospital, the largest gift the Beloit Health System Foundation has ever seen. Diane Hendricks, owner and chairwoman of ABC Supply and Hendricks Holding Co., said her and her family’s goal for their donation was to save lives in their community and allow patients to get all the heart care they need in one location. “We’re not making it for one group. Everybody is going to benefit, everybody in the community,” Hendricks said. “It’s wonderful when you can affect a whole population.”

Brad Irvin, vice president of operations for Beloit Hospital, said 80 percent of heart patients will come from Beloit, with others coming from as far as Lake Geneva and Delavan in Wisconsin and Rockford and Freeport in Illinois. The heart hospital will double the previous clinic and diagnostic space and house a vascular surgeon, a cardiothoracic surgeon, two medical cardiologists and three interventional cardiologists.