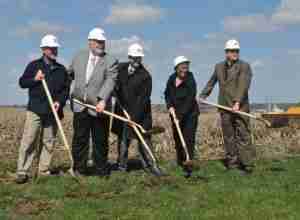 CLINTON — Community members and area officials celebrated Data Dimensions’ construction of a new facility at the Lyons Business and Technology Park during a ground-breaking ceremony Wednesday.

The Wisconsin-based process automation company plans to make a $6.2 million investment in the community that will double its current footprint and workforce in Clinton. The company’s new facility will be 26,000 square feet and will occupy about 5 acres behind the Winkel, Parker and Foster building. It will house a state-of-the-art Tier II data center and will allow the company to service its tremendous growth anticipated over the next three years.

Mayor pro tem Paul Gassman applauded the company’s decision to expand in Clinton and cited it as another example of positive developments in the community.

“We’re overwhelmed that the Data Dimensions group will build here and bring 130 jobs to Clinton. It’s just one more success story that we have business here that is willing to invest in Clinton,” Gassman said.

The city of Clinton will provide a property tax reimbursement over 10 years that is estimated to be worth $1,918,728 as a local match for the state benefits for the facility, which is expected to be operational by November.

Data Dimensions Chairman Mark Bush told the approximately 40 people who gathered for the groundbreaking that making these kinds of investments is an emotional subject because Data Dimensions is privately owned.

He noted that Data Dimensions is the largest privately held business process automation company in the U.S.

Bush said he does not often work in economic development deals, but was pleased with the the swift process in Clinton and pledged to maintain the strong relationship he has with the city of Clinton.

“You have my, and everybody within Data Dimensions, relentless commitment. We love this business, we’re committed to this community and we’re excited to move forward,” Bush said.