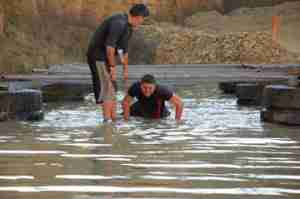 Participants in the first annual Rockin’ the Mud Challenge battled freezing temperatures, scraped knees and exhaustion to finish the 2-mile-long course at CCI Limestone & Excavation’s Quarry in Beloit on Saturday. The event was held by Hendricks Commercial Properties to benefit the Rock County Cancer Coalition.

Runners at the first annual Rockin’ the Mud Challenge battled the cold, scraped knees, sore hands and utter exhaustion for a good cause Saturday.

Sponsored by Hendricks Commercial Properties and held at CCI Limestone and Excavation’s Quarry off Gateway Boulevard and Town Hall Road in Beloit, the event raised funds for the Rock County Cancer Coalition (RCC).

“We have been a little low on funds, so this event comes at a perfect time for us,” said Bruce Thoms, President of the RCC.

The RCC is a non-profit organization that provides financial assistance to cancer patients and their families in Rock County.

“We really help cancer patients be provided with their basic needs,” said Brigette Thomas, RCC treasurer. “We make sure they have food and can help them pay some household bills if they just don’t have the funds. We’re really thankful that Hendricks helped us with this event.”

Since June of 2011 the organization has helped 75 Rock County residents battling cancer with more than $45,000 worth of aid.

More than 60 runners and 110 spectators braved a chilly morning and showed up to the race organized by Milton Family Recreation in order to help raise money for the organization.

“We’ve done mud runs before in Milton and Hendricks Commercial Properties contacted us so that one on a smaller scale could get started in Beloit,” said Eric Stockman, Director of Milton Family Recreation. “These events are great and we’re even going to be hosting one for the Edgerton Fire Department next May.”

The Beloit race’s 2-mile-long course was a tough one, with walls to scale, freezing water to crawl through, as well as mountains of dirt and unsteady rocks to climb.

The very first runner to cross the finish line was Bill Gilmore with a time of 26:45. His time would have been a few minutes less, he said, but he found himself a little lost on the lower portion of the race course.

“It’s really tough,” said RCC Vice President Terry Peterson after he finished the course. “My goal was just to finish and have fun.”