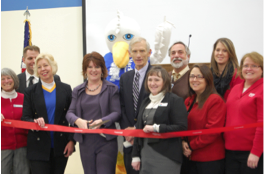 “It’s amazing to see the transformation in your buildings and students,” Rep. Janis Ringhand, D-Evansville, said. “The learning environment will provide a bright future for Beloit.”

“The community is the schools, and school is the community,” City Councilor David Luebke said.

Guests gathered in Hackett’s gym amidst a seas of blue and gold balloons, and T-shirts to celebrate the completion of Hackett’s expansion.

In May of 2013 ground broke at Hackett, 533 W. Grand Ave., originally a one-story school with 28,000-square-feet of space. Hackett is one of six schools in Beloit getting an expansion and makeover. A new Beloit Memorial High School pool was built and a to-be-built Fran Fruzen Intermediate School will be erected thanks to a $70 million referendum approved by voters in 2012.

During Tuesday’s festivities, Principal Marcia Schwengels also announced that a new playground would be added to the site, donated by the Lowe’s Charitable and Educational Foundation. The dedication also featured remarks from Ringhand, Luebke, Hackett educator Mary Knudson, Superintendent Steve McNeal, Board of Education President Shannon Scharmer, Kevin Day of Corporation Contractors, Inc. (CCI) and Clint Selle of Bray Architects with a special performance from the Beloit Memorial High School Jazz Band. After the ribbon cutting guests were treated to tours by the Hackett Student Council and refreshments.

McNeal said the transformation of the community’s school’s started in the district’s board room, and he commended the Board for their support of administration’s recommendation to move forward with the $70 million referendum. He also commended the “generous and forward thinking” landowners who worked with the district to sell their properties so the school could expand. He also noted the fine workmanship of general contractor CCI and design of Bray Architects.

Scharmer praised both the district and the community of Beloit at large for embracing her children and learning. She said she thinks of opportunity, diversity, collaboration and a future when she thinks of Beloit.

In addition to thanking students for displaying their Hackett pride and teachers for making the transition smooth, Principal Schwengels also praised CCI for a great job. She thanked custodian Phil Matthys, aka “Mr. Phil” for helping keep the site clean and orderly during the transformation, and after the ceremony noted that Mattys’ wife made a special scrapbook of the building process.

Schwengels told the crowd how Lowe’s Charitable and Educational Foundation has awarded a $50,000 Lowe’s Toolbox for Education grant to Hackett Elementary School for a new playground. Hackett is one of only 350 schools across the US to be awarded a Lowe’s Toolbox for Education grant this fall for improvement projects during the 2013-14 school year. The project is scheduled to be completed in August of 2014, just in time for the next school year.

In order to put the majority of funds into equipment playground purchases the school is choosing the Community Build option — relying on volunteers to help build the playground, saving around $9,000 on installation costs. In addition to needing volunteer help, the school is looking for community donations to install a safe playground surface under the playground, such as poured rubber or rubber pieces.

Those willing to help install or donate funds/materials for the playground surface can contact Kelly Berg, VISTA volunteer for Hackett School at 608-36-2400 or kberg@sdb.k12.wi.us.