Hendricks Center For The Arts 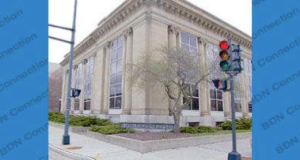 The old Beloit Public Library building on Pleasant Street was given to Beloit College as a gift f rom Ken and DianeHendricks. It will be renovated into an educational artsfacilitycalledtheHendricksCenter.Thenewfacilityshould be open by summer 2010.
BDN file photo

Hendricks gift will transform former library for college use

By summer 2010, the 48,000-square-foot facility will house studios , teaching areas and public spaces aimed at expanding Beloit’s arts offerings to both Beloit College students and the community.

The announcement of the new Hendricks Center was made during a news conference at the former library this morning. P lans for the educational facility have been in the works for a couple of years now.

In the original development agreement, the city purchasedthe formerJ.C.Penneystore at the Eclipse Center from the Hendricks Group and in turn trans ferred owners hip of the library s ite downtown to Hendricks. Ken and Diane Hendricks then gave it to Beloit College as a gift that includes not only the structure, but renovations as well.

“It was many years ago when Ken and I first met with the library board to discuss expansion and relocation,” said DianeHendricks,chairpersonofABC Supply.“The vision was to relocate thelibraryto theold BeloitMall and tocreate a ‘community center’ which in turn influenced the naming of the mall to the new ‘Eclipse Center — where people connect.’

“Ken and I thought the old library with its great architecture could best be used by Beloit College.This would enable thecollege to become more visibleandinvolvedin thecommunity.Therehavebeen manychallenges incompleting these projects but dreams are never met without struggles, and I hope to always be able to continue to add to the sustainability and richness of life of this community.”

Once renovated, the Hendricks Center will be home to Beloit College’s music and dance programs and other campus educational activities.Community outreach programs and workshops will also be held.

“LocatedattheheartofBeloit’sdowntown,itwillfulfilltheHendricks family’sdreamofcreatingastate-of-the-art education center for the teaching of these important art forms and one that will tie the college and the community together,” said James Sanger,chair of the Beloit College Board ofTrustees.

BeloitPublic LibraryInterimDirectorElizabethCooksaideveryoneatthelibraryis very happy that the oldbuilding will be reused for the arts.Although the building was good for a library in the 1960s, it just couldn’t keep up with the changing times,Cook said.

“It’s a cool building in many ways ,” s he said.Cook compared the old library to a house that someone lived in for many years. “It’s nice to knowsomeone else will loveandtakecare ofit,”shesaid.“We wereafraidit wouldmaybe linger.Weknew it couldn’t sit empty. We couldn’t have left if it was going to sit empty.”

The Hendricks Center will be an entirely new arts educational facility for the college,said Susan Kasten of the Office of Communications andMarketing.Also downtown is thecollege’s CenterofEntrepreneurshipinLiberalEducation,which houses the Myers Institute for the Art of Business and the Business of A rt and Gallery ABBA. Those will stay in the CELEBcenter.

Sincethenewfacilityisintheearlyphases ofdesign,there’sstillalottobeworkedout,Kastensaid.Butshedoes know there will be rehearsal rooms,a computer lab and smart class rooms equipped with the latest technology.Once the final design is completed, renovations are scheduled to begin this summer.