CCI is proud to have been part of this incredible transformation. Hotel Goodwin is absolutely stunning! Well done team CCI!

BELOIT – Beloit’s newest downtown hotel is ready and open for business, bringing to life the city’s rich downtown history with a splash of modern flair.

While some construction continues, Hotel Goodwin has opened its doors and adds a boutique, 34-room hotel at 500 Public Ave. The hotel is managed by Geronimo Hospitality Group, a company affiliated with Hendricks Commercial Properties. 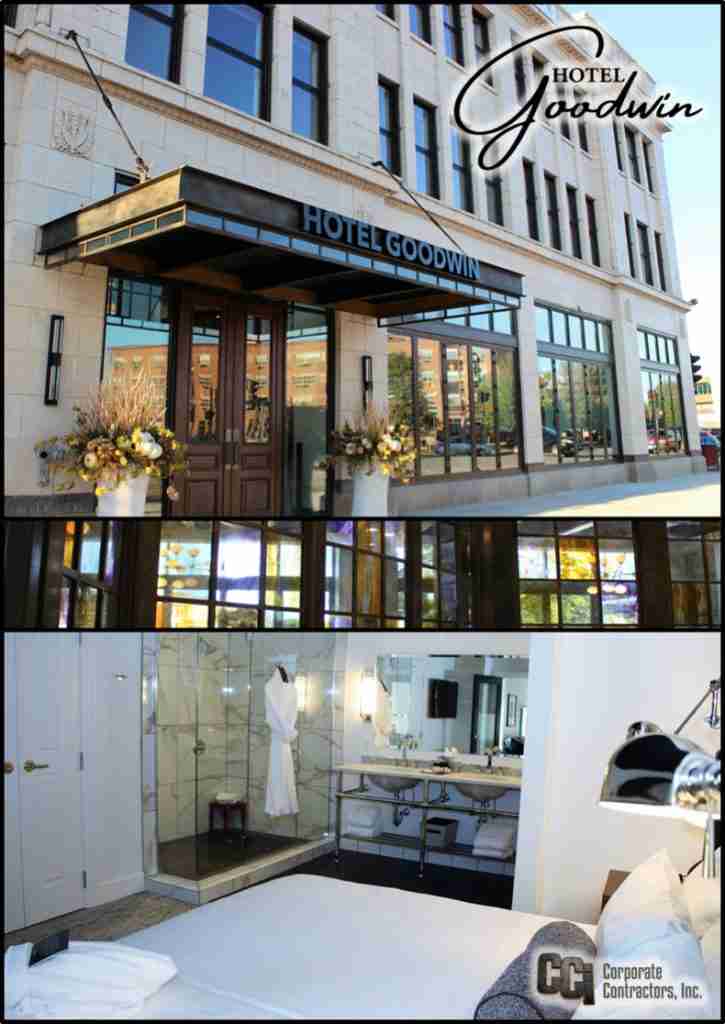 Opening on Sept. 25 at the hotel is the Velvet Buffalo Cafe, an artisan, small plates and stone-fired pizza restaurant equipped with a 120-wine bar array. The eatery is expected to hold around 100 diners.

Head up to the top of the hotel and you’ll find yourself in a private rooftop terrace space that will be open to private events and conferences, boasting panoramic views of Beloit that spans Beloit College, the Rock River, Ironworks campus and the downtown business core.

“I just love the style of the hotel, and it’s exciting to offer another option for Beloit,” said Hotel Goodwin General Manager Karen Niffenegger. “I can’t express how awesome this property is and for everyone to see it for themselves, because I don’t think that just seeing it online does it justice.”

The terrace will be served by Velvet Buffalo.

The cafe’s name is a play on the classic pairing “wine and cheese,” with a glass of fine wine sometimes referred to as “Velvet” while “Buffalo” comes from the mozzarella made from the milk of the Italian Mediterranean water buffalo, according to Jonathan Webster, Geronimo Hospitality Vice President of Lodging.

The modernized hotel includes a fitness center and conference space, while the rooms are designed to be spacious and each come with a TV, Keurig and bluetooth-enabled turntables with an accompanying record collections different in every room, just like each piece of art found in the rooms.

The hotel stands as a major adaptive reuse of a historic downtown property that was built in 1923.

The original Goodwin Hotel and Opera House were located on the property of what is now First National Bank & Trust Plaza. The historic hotel was built after dry goods store clerk Samuel J. Goodwin relocated to Beloit from New York in 1868, according to The History of Rock County, Wisconsin: Early Settlement, Growth and Development.

Goodwin was elected mayor of Beloit in 1870, according to the historical record.

The adaptive reuse style is central to Hendricks Commercial Properties’ vision, with the Beloit Ironworks campus now home to over 45 businesses and startups after lying dormant following the demise of the once-mighty Beloit Corporation.

Webster said the hotel would serve as a reminder of how far Beloit has come.