Work is continuing at the Janesville ice arena, with construction workers finishing remodeling of the building in anticipation of the first season o f the Janesville Jets Junior A hockey team. The new office space, though smaller, is located in the same area it was before work began. 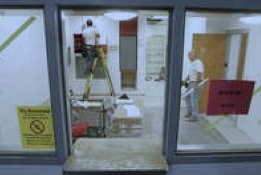 Cost: Tickets are $9 for adults and $7 for seniors and students. Children 5 and under are free.

JANESVILLE — Bright paint, new cabinetry and a new floor plan have given the Janesville ice arena a facelift in time for the opening Jets hockey game on Saturday.

To bring the Junior A hockey team to Janesville, the city council spent $200,000 to remodel the arena, including building the team its own locker room and adding a concession stand to sell beer.

Installation of an infrared heating system in the east bleacher section is the only item that probably won’t be finished by game day, Matt McGrath, senior engineer, said Tuesday. Other work should be finished Thursday.

Meanwhile, the ice itself is doing well, McGrath said. Failures in the cooling system caused the rink to be closed earlier this year.

T he renovations are mostly limited to the west end of the building, where the concession stand, warming room and party room were located.

The Janesville Youth Hockey Club concession stand has moved to the middle of the west end and was fashioned from a hallway and a bit of the warming room.

The new party room is accessible from the warming room and was made from hallway space and by enclosing an exterior porch. The bathroom doors were widened to be wheelchair accessible.
The Jets concession stand is in the former youth hockey club concession stand. The team will sell shirts, hats and beer in that area. Kevin Smithback, marketing coordinator for the Jets, is involved in Janesville Youth Hockey, so he is familiar with the facility. He said all user groups at the rink would benefit from the changes.

“Therink needed a face lift,” Smithback said.“I think it will be a new source ofcommunity pride.”

Remodeling was kept to a minimum because the ice rink faces an uncertain future.

T he aging facility needs more than $1 million in repairs, but a private group is discussing raising money to help the city build a new rink.