A massive city revitalization project has Ken Hendricks’s fingerprints all over it, in spite of his absence. 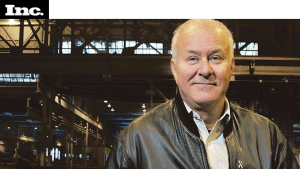 Diane and Ken Hendricks were united by love and vision.

On Saturday, The New York Times published a lengthy article about Diane Hendricks’s quest to revive the struggling town of Beloit, Wisconsin, by luring startups and investing in new development. This tale of optimism and endeavor felt, to me, like a ghost story. Missing was the formidable, blunt, cocky presence of Ken Hendricks, who died in an accident at his home in 2007. If you’d asked me 20 years ago what an Inc. guy looks like, I would have named Ken.

In 1982, Ken and Diane Hendricks founded ABC Supply, a roofing materials business with annual revenue exceeding $3 billion at the time of Ken’s death. (Reported revenue now approaches $8 billion.) In the 1980s, ABC had climbed in succeeding years from No. 3 to No. 2 to No. 1 on Inc.’s list of the fastest-growing private U.S. companies, a feat never repeated.

Ken was the CEO and ABC’s public face, but husband and wife were equal partners. When I visited Beloit a year before Ken’s death, he compared their relationship to that of the Home Depot co-founders Bernie Marcus and Arthur Blank. “I’m the one out front, getting things started,” he told me. “Diane is the finisher, taking things down to the last detail.”

I was in Beloit in 2006 to report on the revitalization effort that was already well under way. Ken and I visited many of the places in the Times story, including the Ironworks, an abandoned foundry that the Hendrickses had bought out of bankruptcy and begun stocking with businesses. Eleven years later, Diane has attracted more, and what sound like techier, companies there. But I was pleased to see American Aluminum Extrusion–a rock-ribbed industrial stalwart–still anchors the complex.