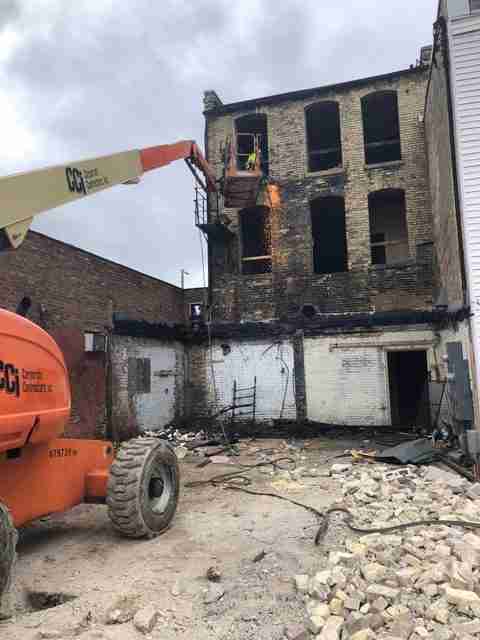 CCI crews will reuse bricks from this three-story demolition project in Janesville to rebuild a facade that replicates a historic 1870’s hotel.

JANESVILLE  By August, a mostly vacant triplet of West Milwaukee Street storefronts will be transformed into loft-style apartments with off-street parking and a private courtyard.

But first, one of the historic buildings at 415-419 W. Milwaukee St. will have to be razed and part of its front rebuilt from the ground up.

The façade will shield a private courtyard for those living in a pair of loft apartments Gilbertson plans to build above the two storefronts to the east. The apartments would put the upper floors of a circa-1870 hotel back into use after years of vacancy.

Crew members from Corporate Contractors Inc. said they plan to use bricks from the three-story building being razed to rebuild a façade that replicates the historic first-floor front of the hotel.

Among the façade’s features, the contractors said, will be a doorway and a set of arched windows that likely will be built from curved brick and stone used in the building’s original windows.