Merrill & Houston’s: A Steak Joint With Plenty of Sizzle

Meet the faces behind downtown Beloit’s newest favorite, and discover some of the local history that’s memorialized inside. 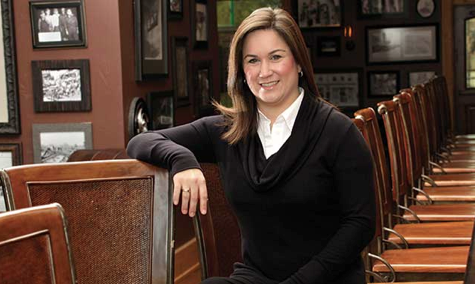 One look around Merrill & Houston’s Steak Joint, 500 Pleasant St., and Beloit’s rich history comes alive. “It’s a tribute to our city’s past and the industry leaders who created Beloit,” says Jayme Braasch, the restaurant’s general manager. “We want people to feel like they can really connect with Beloit.”

Merrill & Houston’s opened in July 2012 in the Beloit Inn, after more than a year of extensive construction to both by its parent company, Hendricks Commercial Properties.

The restaurant is named after Orson Merrill and George Houston, who founded Merrill and Houston Iron Works in 1858. It was later named Beloit Ironworks in the 1880s and eventually renamed the Beloit Corporation.

With its rustic feel, leather seats, hardwood floors and many historic photographs lining the walls, Merrill & Houston’s tells a great story through its food and tribute to the past. Much of the material used in the construction is old and reflects a piece of history. The bar, for example, was constructed from wood gathered from a house that once stood on the property of the Iron Works.

“I believe the community appreciates how this restaurant was branded,” Braasch says. “I walk around the restaurant on a Friday night, and I can hear people chatting. They’re saying, ‘I remember that night or that car or that store.’ The stories that come from the different photographs are amazing.”

Braasch knows firsthand. The Beloit native has worked in the restaurant industry for 17 years. When she interviewed for the general manager position last year, she spotted an old photograph of her grandfather, who once worked at Freeman Shoes and was a member of the Beloit Motorcycle Club in the early 1900s.

“Our restaurant showcases a piece of reality for so many people,” she says.

As the name implies, the restaurant features mouth-watering steaks along with a full service menu of fish, chicken and seafood selections. Specialties include seafood Alfredo, duck a l’orange, and broiled pike almondine, complemented by a toasted almond lemon butter. “Our menu is not over the top,” says Braasch. “We offer something for every customer.”

The variety of steaks is plentiful. There’s the rib-eye, porterhouse and New York strip. If you prefer a smaller portion, there’s the petit filet, Manhattan steak, and rib-eye mignon, each half the size of larger selections. All steaks are seasoned and topped with buttered mushrooms and crispy thin onion rings. And for an additional $7.95 each selection can be topped off with crab, asparagus and béarnaise.

“Some people think they can only order a giant slab of meat and will be stuffed in two bites,” Braasch says. “How wonderful is it to go to a restaurant and have varying sizes to choose from? The key to our menu is consistency. We don’t change the wine list or dinner menu very often.”

During the week, much of Merrill & Houston’s business is tied to guests visiting area companies such as Kerry Ingredients, Regal Beloit, and ChemTool. On weekends, the restaurant is a popular spot for residents from all across northern Illinois and southern Wisconsin. Besides dinner, Merrill & Houston’s hosts many special occasions such as birthday parties, reunions, and wedding receptions. The main dining room seats 120 and the banquet room can accommodate 200 guests.

“Fine dining is alive and well, and continues to grow,” Braasch says. “As long as you have quality food, service and a great atmosphere, you can’t go wrong. People want a nice night out. That’s never going to change.”