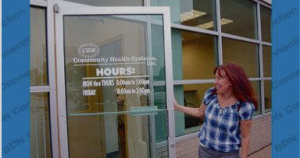 Beloit A rea Community Health Center (BACHC), 74 Eclipse Center, is opening a walk-in clinic at 11 a.m.,Oct.19, according to Sharon Rand, COO /CFO of the health center.

The walk-in clinic will offer convenient care styleservices.A physicianandtwo nurse practitioners have been hired to work at the new operation.

To make more room,space used as a meeting room was transformed into a seven-roomclinic.CorporateContractors Inc. began construction at the beginning of September and finished in a little over a month.

The walk-in clinic will be paid for with
stimulus funds . T he sites in Janesville and
Racine received atotal of$656,000.The
walk-in clinic project in Beloit, including new furniture and the phone and computer systems , c ost $206,500 .

In the pastBACHC has runa typicalclinic with people making appointments.Although RandsaidBACHC tries tofit people in during the day if possible, it hasn’t offered walk-in services on this magnitude before.The new walk-in clinic, she said, will help alleviate the many people flocking to the hospital emergency room for inappropriate reasons .

Rand added there has been a surge in people coming to BACHC in light of the economy.In April BACHC dropped its fees to help accommodate patients . O ftentimes patients have to wait four to five weeks for an appointment to get in.

“With the walk-in clinic, we are hoping to provide some longer hours and more convenient hours, rather than having to make appointments ,” Rand said.

“Filling out financial applications in the main clinic is time consuming. In order to make this run smoother, we’ll just have a flat fee,” Rand said.

The BACHC,a non-profit 501c3 organization, is income based health care.It accepts Medicare,Medicaid and traditional insurance,although most of the patients who come are without insurance.BACHC had a total of8,500 clients in Beloit in the past year.