Seawall Under Construction By CCI 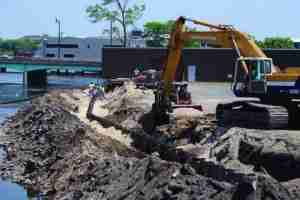 Work is under way behind the Beloit Post Office on a new section of the River Bend Shoreline Stabilization project. The flood of 2008 brought federal emergency money to Beloit for help with such projects.

Workers from the main team at Corporate Contractors Inc. and subcontractors from Gilbank Construction were hard at work this week on the latest phase of the Shoreline Stabilization project. The seawall that is under construction behind the post office will slow riverbank erosion and keep potential flood waters out of nearby buildings.

“The seawall will protect the post office. It should also make the riverfront there much more attractive,” said Andy Hill, project engineer with the City of Beloit. “The 2008 flood initiated the project. The post office had to close because of the flood and be temporarily relocated. The project under way should prevent that happening in the future.”

The seawall location lies between the post office parking lot to the south and the Rock River to the west where the river turns south. The closed Wisconsin Power and Light coal gas location sits to the southwest of the seawall area.

“The post office area was the only part of the downtown that experienced surface flooding,” said City Manager Larry Arft.

Hill designed the wall as part of the package of repairs and replacements paid for by the federal government after the flood four years ago that struck Rock County and 30 other Wisconsin counties. Since 2008, Wisconsin has received $124.3 million in flood relief from U.S. Housing and Urban Development.

In one grant package, Beloit received $750,000 for seawall repairs and replacement. An additional $45,000 was designated for repairs to the Shirland Avenue Lift Station. Money from this grant pays for the current seawall work.

“We already applied some of the grant money to the rip rap used on the riverbank down by The Angel Museum,” Arft said. Rip rap is rock used to anchor shorelines. “When the current project is done we may find ourselves under budget.”

The funds may be applied to the area around the lagoon. He said, “We are running out of time environmentally. The narrow strip of land that separates the lagoon from the river lost three feet this year. We have to get in there and stop the erosion.”

Contractors started work on the post office area May 1. Hill said they hope to finish the work before Riverfest opens June 27. Its new location is nearby.

Plans for the seawall are available for public viewing at the city of Beloit’s website. They call for steel sheet piles to be set 30 feet into the ground.

“On top of that we will build a concrete wall that looks similar to the one at the Mill Street parking lot,” Hill said. “I used the Mill Street lot to go by. It’s a straightforward project.”