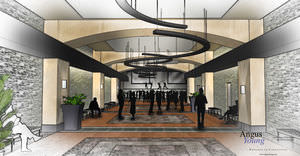 Future look
This architectural rendering shows what the Eclipse Center will look like in spring of 2015. This January Corporate Contractors, Inc. will begin interior renovations followed by exterior renovations in early spring.

Hendricks Commercial Properties (HCP) will be starting its final phase of renovations to the Eclipse Center.
By late spring the former mall will have an open courtyard, new signage, unique architectural features and landscaping, and more room for potential tenants, according to Rob Gerbitz, president of HCP.

Gerbitz said the renovations are the “final chapter” in transforming the Eclipse Center into a vibrant home to businesses, educational institutions and community services — a vision ABC Supply Co.’s Chairman of the Board Diane Hendricks and her late husband Ken shared since taking sole ownership of it in 2003.

In January of 2015, Corporate Contractors Inc. will begin remodeling the former mall’s interior and by spring of 2015 it will begin on the final stretch of the building’s façade.

Gerbitz said the final renovations will remove any vestiges of the look of the former mall. The interior renovations will begin first to ensure everything is ready for the Greater Beloit Chamber of Commerce Annual Dinner and other spring events.

Center court renovations will consist of finish upgrades, minor structural modifications and additional architectural features to enhance the appearance, functionality and overall experience within the space.

Architecturally, wood veneered columns and arches, along with stone accent walls, will be added along the corridors. A few interior columns and a section of the roof structure will be raised to open up the center gathering area, along with an added bar location. Current plans also allow for future renovations for added separate conference rooms.

Exterior work at the Eclipse Center will consist of a continuation of the façade remodel along the north end of the building.

The former mall roof structure at the north corridor will be removed, providing an open courtyard. Many architectural features will be added to enhance this courtyard including new colored and stamped concrete surfaces, masonry planters, sitting walls and canopies.

In June of 2010, HCP hired CCI to begin a massive redevelopment renovation of the building as well as the entire facade and parking lot. The biggest change to the Eclipse Center in 2010 was the transformation of the 66,000-square-foot former Sears store on the northwest corner of the building. After 2011 upgrades, the Eclipse Center had an eclectic, prominent and inviting look with plenty of patios and landscaping.